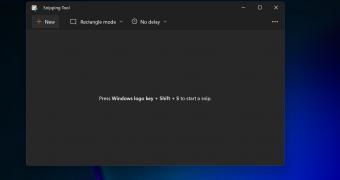 The newly-launched Windows 11 comes with massive improvements, but on the other hand, it also includes a series of problems that users are coming across these days.

One of them affects the Snipping Tool, which has been refreshed for Windows 11, so it now comes with important refinements, including a dark mode.

But as it turns out, users claim the Snipping Tool doesn’t launch on Windows 11, and at this point, the issue appears to be quite widespread.

A discussion thread on Microsoft Tech Community has plenty of users reporting the same problem, and at this point, Microsoft is yet to acknowledge the glitch.

“Win+Shift+S does not open the snipping tool in Windows 11. I can manually launch the app, but if I click “+New” a window pops up stating “This app can’t open. A problem with Windows is preventing Screen S… (read more)
Source: Softpedia News