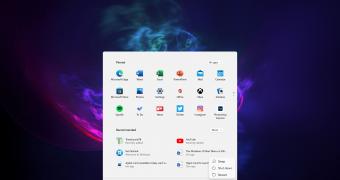 Microsoft has released a new Windows 11 preview build to users in the Dev channel, and naturally, the Start menu and the taskbar, both massively overhauled in this operating system, getting their very own set of improvements.

Windows 11 build 22478 therefore includes a fix for the Start menu that prevents the keyboard focus from no longer getting lost if you press ESC after opening the user profile flyout.

At the same time, Microsoft says it has updated the prompt text when pinning UWP app content to Start, with the new message just reading “Do you want to pin this to Start?”.

As far as the taskbar is concerned, the software giant says it has finally addressed the bug that caused a crash of explorer.exe when left and right-clicking the taskbar at the same time.

Furthermore, Microsoft says it has resolved the issues with the Notification Center that caused this feature to freeze and then to stop launching completely.