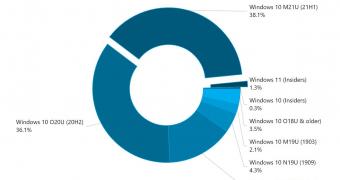 Windows 11 is projected to go live next week, but the operating system has already caught the attention of an important share of the userbase.

As a result, many of the users out there installed the Windows 11 preview builds released as part of the Windows Insider program, so right now, the new operating system is already running on 1.3 percent of the PCs with access to the Microsoft Store.

This is according to AdDuplex, which also revealed that Windows 10 version 21H1 is currently the most popular Windows 10 release with a share of 38.1 percent, followed by version 20H2 with 36.1 percent.

Not everybody eligible for the free Windows 11 upgrade

While the launch of Windows 11 next week is one of the most anticipated releases of the year, worth knowing is that not all computers running Windows 10 will be eligible for the upgrade to the new OS.

This is because Microsoft has updated the system req… (read more)
Source: Softpedia News