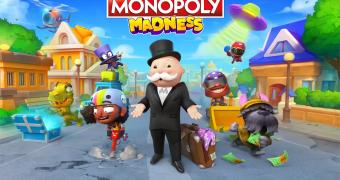 Ubisoft’s new take on Monopoly will be coming to PC and consoles in December 9, the French studio announced recently. Dubbed MONOPOLY Madness, the game will release for PC via Ubisoft Store, Xbox One, Xbox Series X/S, PlayStation 4, PlayStation 5, Nintendo Switch, and Google Stadia.

The official website of the game is already up and running, but here is a quick rundown of what MONOPOLY Madness has to offer. First off, players will compete to buy and upgrade properties in MONOPOLY City while Mr. Monopoly is away on his well-earned vacation.

The game lets you play against up to 5 other players in shorter rounds that are a frantic, real-time race on the chaotic streets of MONOPOLY City without the boundaries of the board. Furthermore, players will need to collect money and other resources around the map in order to buy and upgrade their properties. The more properties players own, the more points they’l… (read more)
Source: Softpedia News