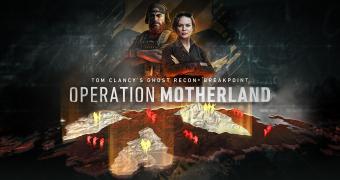 After cancelling the beta of its newly revealed multiplayer Ghost Recon Frontline following fans backlash, Ubisoft is trying to improve its other multiplayer game in the same Ghost Recon universe, Breakpoint.

The French company announced this year a major update for Tom Clancy’s Ghost Recon Breakpoint is set to arrive on November 2 on all platforms. Dubbed Operation Motherland, the update will bring a lot of new content that should make the game slightly more interesting for those who’d like to try out other modes.

In Operation Motherland, players will help Karen Bowman and the outcasts liberate the island of Auroa which is at the center of an upcoming global conflict. More importantly, the update adds a brand-new faction of enemies, The Bodarks, who will do everything to block the Ghosts’ progress.

One step backward, pivot, pivot again, stop to think a little. My character is holding on to an asymmetric... read more