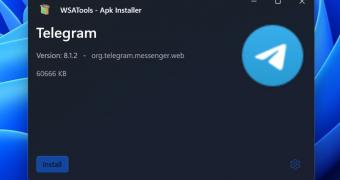 Microsoft has already received a preview of Android apps on Windows 11, and now Microsoft is working on bringing it to more users and expanding the number of apps they can install.

Worth knowing, however, is that only a limited number of apps are currently available for these testers, with Microsoft explaining it worked with its partners to release some 50 popular Android items to download and install on Windows 11.

While the company is obviously working on bringing more Android apps to Windows 11, the skilled developers out there have already found ways to install Google Play Services and pretty much any other Android app, even if it’s not supported by Microsoft right now.

The process, however, is rather complex and requires additional commands that you need to run each time you want to install an Android app.

New tool to make everything easier

A tool published on the Microsoft Store and called <a href="https://www.microsoft.com/en-us/p/wsatool… (read more)
Source: Softpedia News