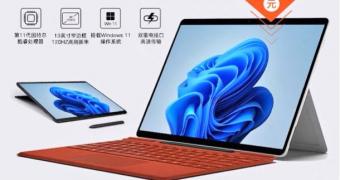 Microsoft will unveil its new-generation Surface device lineup this week, and people with knowledge of the matter have already said on several occasions that a new Surface Pro model is very likely to be launched as well.

But of course, the Redmond-based software giant has remained completely tight-lipped on everything, so as far as Microsoft is concerned, its September 22 event is still as mysterious as it gets.

On the other hand, information coming through unofficial channels online provided us with an early look at some of the specs of new Surface models, and today, it’s the turn of the Surface Pro 8 to get some love.

A tweet published by @Shadow_Leak on Twitter offers not only an early look at the hardware specifications of the new Surface Pro but also with a peak at its design, as a retail ad shows the device in all its glory.

While this can very well be just a placeholder, the photo sho… (read more)
Source: Softpedia News