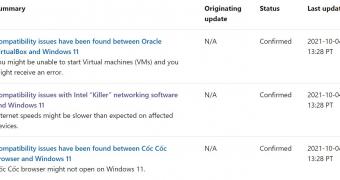 Windows 11 is now available for download for production devices, but as said, the rollout takes place in stages because Microsoft wants to detect potential problems early and prevent them from hitting devices out there.

At this point, there are three known issues in Windows 11, all of them listed as compatibility problems between the operating system and various software.

In the case of Oracle’s VirtualBox, Microsoft says that one possible workaround is to just remove Hyper-V temporarily. Oracle has promised an update to land as soon as this month.

“To mitigate the safeguard, you will need to remove Hyper-V or Windows Hypervisor until this issue is resolved with an update Oracle plans to release in October 2021. You can check Oracle’s progress by monitoring their ticket #20536. If you are no longer using Vi… (read more)
Source: Softpedia News