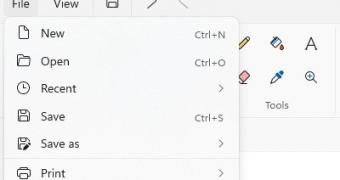 Windows 11 comes with a redesigned Paint app which, as you could easily guess, comes with an overhauled interface that aligns it with the rest of the operating system.

While the highly anticipated dark mode hasn’t been enabled just yet, it looks like the new Paint does come with something that you won’t be able to unsee too soon: it’s a typo in the File menu that somehow went unnoticed during the beta testing and is now bundled with the app even on production devices.

As spotted by someone on reddit, if you want to open a new file in Paint, you also have the option to import an image from the scannner or from the camera. You know, because everybody has a scannner these days anyway, so this makes perfect sense.

As if this wasn’t already announced for people obsessed with typos and everything grammar, users on reddit claim some of the Wind… (read more)
Source: Softpedia News