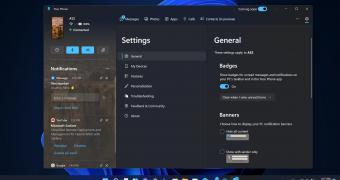 We’ve known for a while that Microsoft tried to make Android devices feel like home on Windows PCs with the Your Phone app, and the project has evolved so much that it’s now a very good catalyst for giving up on an iPhone and switching to Google’s platform.

As you can see in the screenshot here and published on Twitter by AL, the Your Phone has reached the point where nearly everything happening on your Android device lands directly on Windows 11.

Including notifications, messages, photos, apps, calls, and contacts, all displayed in a very modern-looking UI that provides one-click access to everything.

Sure, the interface may be considered a little bit cluttered at first, but it’s probably just a matter of time until you get used to where everything is currently located.