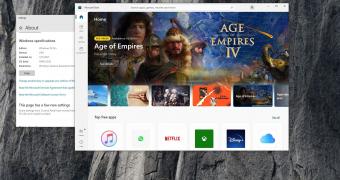 Microsoft has substantially refined the experience with the Microsoft Store in Windows 11, introducing a new design, support for Win32 apps and so much more.

The purpose is as simple as it could be: make the Microsoft Store the one destination for everything, a plan that Microsoft announced from the very beginning but which until now failed to get much traction.

And now, Microsoft is bringing the new Windows 11 Store to Windows 10 as well, as the company wants to provide users who’re stuck with the older version of the operating system with many of the improvements it announced recently.

The new Store is shipped as an app update, so the next time you launch the Microsoft Store on a Windows 10 device, there’s a chance you’ll see the beautiful new design a la Windows 11.

Plenty of changes on Windows 11

On Windows 11, however, the Microsoft Store delivers a completely overhauled experience, starting with the said design and ending with the support … (read more)
Source: Softpedia News

If you’re a fan of racing games, there’s no doubt you’ve already tried the likes of Need for Speed,... read more