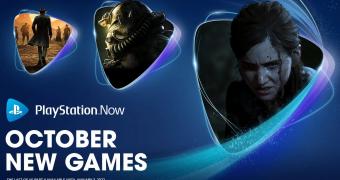 Sony is adding new titles to its PlayStation Now every month, and October is no exception to the rule. However, this time around subscribers will be getting some GOTY material, not just good or decent games.

The highlight of the PlayStation Now October lineup is, of course, The Last of Us II, the game that won so many awards last year. But that’s not the only important title joining PlayStation Now in October. There are six other game that will be available to those who pay for a subscription, including Desperados III, Fallout 76, Amnesia: Collection, Final Fantasy VIII Remastered, Yet Another Zombie Defense, and Victor Vran: Overkill Edition.

One other thing important thing related to The … (read more)
Source: Softpedia News