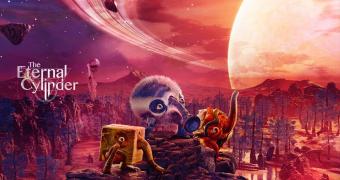 One of my trebhums has big legs and can reach out of the way platforms. Another has hardened skin and can turn mushrooms into water. My currently chosen protagonist can also attract weird flies with some spikes on his head. I plan to deal with this puzzle before dropping that one for a more useful mutation, possibly one that allows me to actually attack some creatures that have so far only hunted me.

The Eternal Cylinder was created by ACE Team and published by Good Shepherd Entertainment, on the PC via the Epic Game Store as well as on the PlayStation 4 and the Xbox One. The game mixes a unique take on creature development with survival and exploration mechanics.

The protagonists of the story are individuals from a species called trebhum but the most prominent character is the large piece of geometry from the game’s title. The massive cylinder moves through the world and seems to destroy everything it touches. The trebhums need to move and innovate to survive. Alo… (read more)
Source: Softpedia News