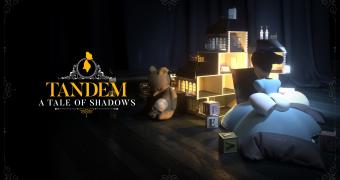 Fenton, the magical bear, stands on the trigger for a door that traps an enemy spider. This leaves his partner, the human Emma, able to drag around a massive piece of wall that’s inexplicably on wheels. She blocks a certain source of light, and the girl moves out of the way of potential enemies. Then Fenton can engage in some light jumping to get to the crystal that will move the pair to the next level.

Tandem: A Tale of Shadows is the work of Monochrome Paris and was published by Hatinh Interactive. The game is offered on the Nintendo Switch, the PlayStation 4, the Xbox One, and the PC, where I played it using Steam. It’s a pretty solid puzzle platformer experience.

The game starts with a young girl named Emma (Alice would have been too on the nose) going to the mansion of a well-known magician to investigate his disappearance. On the way there she meets up with a teddy bear named Fenton, who clearly has magical abilities. The two join forces to solve the puzzles … (read more)
Source: Softpedia News