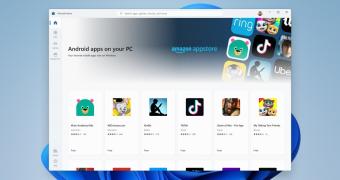 Microsoft has officially launched Windows 11, but despite the so many improvements that come pre-loaded, there’s one big feature still missing.

It’s support for Android apps, something that Microsoft originally announced it’d be part of Windows 11 but which is still in the works as we speak.

Furthermore, Microsoft hasn’t provided any specifics as to when Windows 11 users could be provided with Android app support in the first place, though we do know this feature is projected to land for insiders later this year, and it could be released for users at some point next year.

Android apps will be available on Windows 11 right in the Microsoft Store via the Amazon Appstore.

“We are bringing Android apps to Windows for the first time. Starting later this year, people will be able to discover Android apps in the Microsoft Store and download them through the Amazon Appstore – imagine recording and posting a video from TikTok o… (read more)
Source: Softpedia News