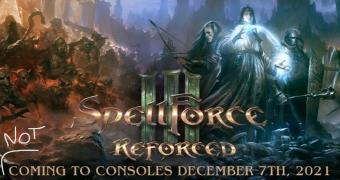 THQ Nordic has just announced it has decided to postpone the console version of SpellForce III Reforced to March 8, 2022. The game was originally slated for an early December release, alongside the PC version, but it’s now being pushed back by three months.

It’s important to mention that additionally to the SpellForce III Reforced base game, both expansions, Soul Harvest and Fallen God, will also be available on March 8, 2022, each one sold separately for $19.99/€19.99. Both expansions feature their own single-player campaign with 30+ hours of gameplay each, as well as new units and more. The whole package, called Spell… (read more)
Source: Softpedia News