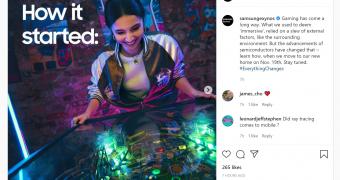 With the launch of the Samsung Galaxy S22 getting closer and closer, it makes sense for the South Korean phone maker to give the finishing touches to its new-generation Exynos chip.

Typically, the company unveils its new Exynos chips in the last months of the year, most often November, as it prepares to use them on the refresh Galaxy S models too.

And the same timing seems to be used this year as well, as Samsung has started teasing what seems to be the new-generation Exynos chip in a post on Instagram.

The post, despite not revealing too many details, suggests there’s something big coming on the Exynos front on November 19, when the company could finally take the wraps of the new-generation chip.

Samsung claims “everything changes” with this new chip, explaining the new design is the living proof of “what entertainment will look like in the future.”

NVIDIA has made available a new STUDIO graphics package compatible with several of its video cards, namely version 472.47,... read more