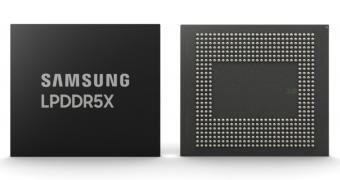 Samsung has recently announced the world’s first LPDDR5X DRAM, with the company explaining that the most important applications are products like smartphones, tablets, and laptops.

Needless to say, the first LPDDR5X DRAM chip comes with notable performance improvements as compared to LPDDR5 DRAM, and the early statistics are impressive, to say the least.

The new design is 1.3 times faster, according to Samsung, while also using no less than 20 percent less energy. It also supports a data transfer speed of 8.5 Gbps, and the company says this is approximately 1.3 times faster than standard LPDDR5, which typically runs at 6.4 Gbps.

“The LPDDR5X DRAM will offer data processing speeds of up to 8.5 gigabits per second (Gbps), which are over 1.3 times faster than LPDDR5’s 6.4Gbps. Leveraging the industry’s most advanced 14nm DRAM process technology, it will also use around 20% less power than LPDDR5 memory. In addition, the 16Gb LPDDR5X chip will enable up to 64 gigabyte… (read more)
Source: Softpedia News