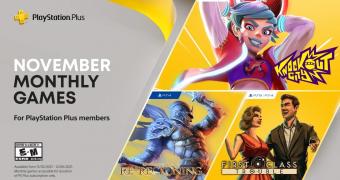 Sony has just announced that PlayStation Plus members will receive no less than six games next month, but there’s a catch. Three of the games included in the bundle are VR games, so if you don’t own a PS VR, you won’t be able to play them. However, you can still add these games to your library in case you plan to purchase a PS VR headset later on.

The three PS VR titles offered to all PlayStation Plus members are The Persistence, The Walking Dead: Saints & Sinners – Standard Edition, and Until You Fall. All three VR games will be available to PS Plus subscribers on November 2.

While Knockout Cicy and Kingdoms of Amalur: Re-Reckoning are well-known among PlayStation players, First Class Trouble is a brand-new title that will launc… (read more)
Source: Softpedia News