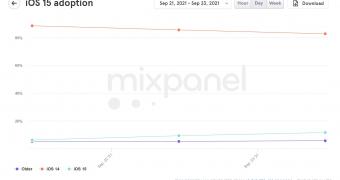 Apple released the new version of iOS on Monday, and naturally, diehards rushed to install the operating system on their iPhones seconds after the company published the download links.

And this makes perfect sense. iOS 15 is a highly anticipated release, and it comes with massive improvements, including new notifications and a Focus mode that allows you to focus on the things that matter based on a set of user-defined rules.

But on the other hand, it looks like not everybody rushed to install iOS 15 on day one.