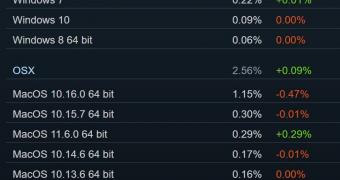 The world is slowly but surely leaving the 32-bit versions of Windows behind, as new data shows almost everybody is now on 64-bit.

The latest figures shared by Valve for its Steam gaming platform show that only a handful of users are still running Windows 32-bit, with the 64-bit editions obviously dominating the charts.

More specifically, Windows 10 64-bit is the top choice for Steam gamers, as this OS version secured the leading place for another month with a share of over 89 percent.

The almost-ancient Windows 7 64-bit is the runner-up with 3.89 percent, while the recently-released Windows 11 64-bit is now third with 1.82 percent.

The first 32-bit Windows version in the charts is Windows 7 with a share of 0.22 percent, followed by its Windows 10 sibling with 0.09 percent.