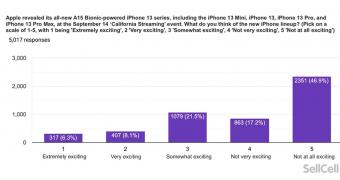 Apple has launched the iPhone 13 and the Apple Watch Series 7 last month, and while the smartphone is already up for grabs, the new smartwatch is projected to hit the shelves later this month.

But according to a survey conducted by SellCell, this year’s generation isn’t necessarily really impressive, as no less than 64 percent of the respondents said they are not very or even not at all excited with the new products.

Out of the existing iPhone users, only 23.2 percent of them said they plan to purchase an iPhone 13. So with less than 1 in four iPhone owners planning an upgrade, it’s hard to believe the iPhone 13 would generate a supercycle, as many customers might de… (read more)
Source: Softpedia News