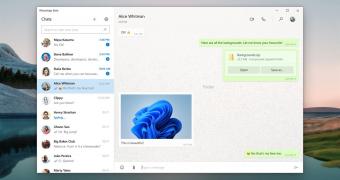 We’ve known for a while that WhatsApp was working on a new desktop app for Windows, and the last weekend, it finally showed up on the Microsoft Store for some users.

As spotted by AL, the new WhatsApp desktop app is still in the beta stage, though it can already be downloaded from the Microsoft Store by those running Windows 10 and Windows 11.

Based on the Electron framework, the new WhatsApp client aligns with the modern visual updates available in Windows 10 and Windows 11, so for example, it also uses the rounded corners that are now part of the new operating system.

At the same time, the app got acrylic, therefore sporting a much more modern approach, especially on Windows 11.

Only available for some

Keep in mind, however, that the app is still part of the beta development stage, so some features may not work ex… (read more)
Source: Softpedia News