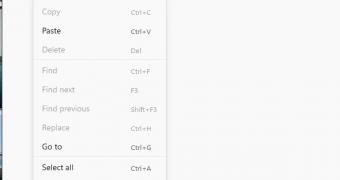 Now that Windows 11 is already available for the first waves of devices, Microsoft can also focus on other related projects, including on the overhaul of the first-party apps coming with the operating system.

Several apps have already been updated with the modern design bundled with Windows 11, but many more are projected to receive the same refresh in the coming months.

And one of them is Notepad, whose new design has reportedly been leaked by a Microsoft engineer (before all screenshots were eventually removed).

The screenshots indeed show that the Notepad app is getting the Windows 11-inspired design, with rounded corners and new context menus, but also with a dedicated settings screen with access to themes – so presumably, a dark mode is in the works as well.

Of course, Microsoft has remained completely tight-lipped on the Notepad overhaul, but expect an early version of the new app to make its way to insiders rather sooner than later.