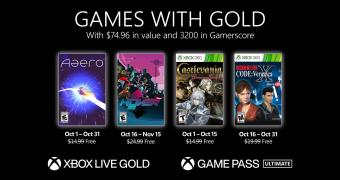 If you’re paying for Microsoft Xbox Live service, you’ll be getting free games every month. October is no exception, so you’ll be getting four games for free next month, which are valued together at around $75 and 3200 in Gamerscore.

Aaero, the rhythm action rail shooter indie game developed by the two-man British studio Mad Fellows, made its debut on PC, PlayStation 4 and Xbox One four years ago. Starting October 1 and through October 31, the game will be available for free as part of Games with Gold.

Next up we have Hover, a fast-paced single and multiplayer parkour game set in a futuristic 3D open world. Equipped with high-tech gear allowing for jumps and speed, you’ll have to help the citizens and find a… (read more)
Source: Softpedia News