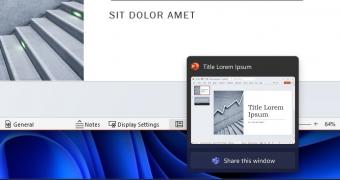 Microsoft is making Microsoft Teams a first-class citizen of the Windows 11 world, so in addition to the chats integration right into the taskbar, the company has also recently announced an ability to quickly mute and mute an active meeting call.

This week, the Redmond-based software giant has announced a new feature specifically to push the Microsoft Teams integration in Windows 11 even further.

When hovering a window on the taskbar, you should now see an option called “Share this window,” which when clicked automatically shares it on an active Microsoft Teams call.

“When you are in a meeting call through Microsoft Teams, simply hover over the apps running on your taskbar and you will see a new button that allows you to share your window with your meeting attendees. When you are done sharing your content, hover over the wind… (read more)
Source: Softpedia News