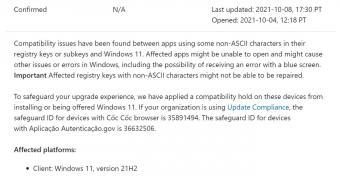 The rollout of Windows 11 is under way, but every time Microsoft comes across a new potential problem hitting eligible devices, the company quickly sets an upgrade block in place, therefore preventing them from receiving the new operating system.

This time, for example, Microsoft has confirmed that some apps could fail to run on Windows 11 or lead to all kinds of other problems on the operating system, so the company has decided to set a new hold in place to suspend the release to potentially impacted computers.

“Compatibility issues have been found between apps using some non-ASCII characters in their registry keys or subkeys and Windows 11. Affected apps might be unable to open and might cause other issues or errors in Windows, including the possibility of receiving an error with a blue screen. Important Affected registry keys with non-ASCII characters might not be able to be repaired,” Microsoft explains.

No ETA for the fix just yet