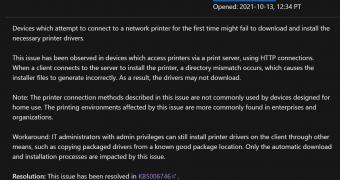 Microsoft says it has managed to resolve another Windows 11 problem, this time causing the installation of printers to fail when attempted over network connections.

The company originally confirmed this problem earlier this month, but worth knowing is the whole thing existed not only on Windows 11 but on Windows 10 too. And Microsoft said that pretty much and Windows 10 and Windows 11 version was affected, as long as it still receives support.

“This issue has been observed in devices which access printers via a print server, using HTTP connections. When a client connects to the server to install the printer, a directory mismatch occurs, which causes the installer files to generate incorrectly. As a result, the drivers may not download,” it explained.

“The printer connection methods described in this issue are not commonly used by devices designed for home use. The printing environments affected by this issue are more commonly found in enterprises and organizations… (read more)
Source: Softpedia News