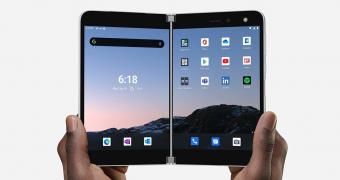 Microsoft has released a new software update for the Surface Duo, the company’s first Android device in history and whose successor is about to launch as soon as the next week.

The Redmond-based tech giant hasn’t included too many improvements in the September 2021 update for the dual-screen Android device, as the changelog indicates it only addresses the security glitches detailed by Google in the original Android security bulletin.

In other words, Microsoft has decided to stick with the improvements included by Google in the original September 2021 security patch, though on the other hand, you should keep in mind the Surface Duo is still running Android 10.

Microsoft indeed promised to bring Android 11 to the Surface Duo, but no ETA has been provided, and right now, all the efforts seem to be on getting the next-generation model ready for prime time.

Microsoft has remained tight-lipped on the Surface Duo 2, but given the comp… (read more)
Source: Softpedia News

Apple rolled out iOS 15 last week, and just as expected, plenty of users rushed to download and install... read more