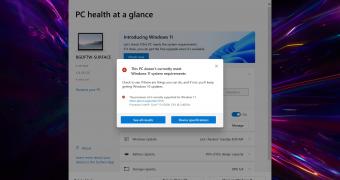 Windows 11 is just around the corner, with the first devices projected to receive the free upgrade on October 5, but this doesn’t necessarily mean the system requirements blunder is over.

Many users are still frustrated they wouldn’t get Windows 11 despite their computers running the preview builds just fine, but right now, it doesn’t seem like Microsoft is willing to change anything about this.

What the company does, however, is provide users with additional tools to help them figure out if the upgrade to Windows 11 is possible or not, especially given all the confusion generated by the updated system requirements.

The PC Health Check app that was originally released for insiders is now live in the final version of everybody out there, so if your computer is already running Windows 10, you can just give it a try to see if you’re ready for Windows 11 or not.