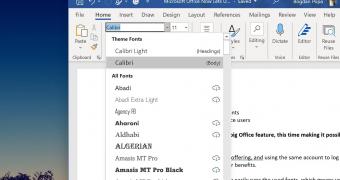 Microsoft has started the rollout of another big Office feature, this time making it possible for users to easily sync their fonts across devices.

Microsoft Office is obviously a cross-platform offering, and using the same account to log into the productivity suite comes with a series of major benefits.

And thanks to this latest update, your can now easily sync the used fonts, which means you’re going to get the same typefaces on all devices where the same account is being used in Microsoft Office.

More important is that the feature also works between desktop and mobile, so for example, you can get the fonts you used on the desktop right on your mobile device.

Furthermore, the new feature makes it possible to get notifications of the missing fonts when opening a synced document on a new device.