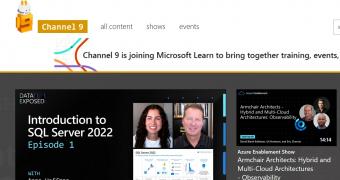 Channel 9 has long been a great way to take a peek at what’s happening behind the closed doors at Microsoft and see how all the new products come to be.

For many people out there, Channel 9 has served as a platform to obtain first-hand technical information directly from the people working at Microsoft, so in many ways, it’s been a great learning tool for those interested in such valuable documentation.

This is why an announcement released by Microsoft today makes so much sense.

Channel 9 is being integrated into Microsoft Learn, with all the content to be migrated to the new platform later this month.

“Later this month, you’ll find thousands of hours of current technical knowledge that you’ve come to expect from Channel 9 in its new home alongside our hugely popular documentatio… (read more)
Source: Softpedia News