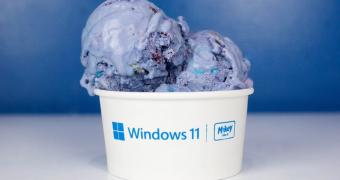 Microsoft rolled out Windows 11 earlier this week, and to celebrate this highly anticipated moment, the company has also introduced a special treat that fans in the United States would totally love.

The software firm has announced what’s being called Bloomberry, a limited-edition ice cream created in collaboration with Mikey Likes It and offered for free at certain locations in East Village and Harlem.

Panos Panay himself teased the ice cream on Twitter, and Mikey Likes It confirmed that Bloomberry was a free treat for the luckiest Microsoft users that combines blueberry ice cream with blueberry pie filling, pound cake, and candy chocolate pieces.

It sounds delicious, there’s no doubt about it, but on the other hand, it was only offered to Microsoft fans in the United States. No love for Europeans, unfortunately.

Windows 11 rolling out in stages

The rollout of Windows 11 is taking place in stages to devices across the world, with Microsoft promi… (read more)
Source: Softpedia News