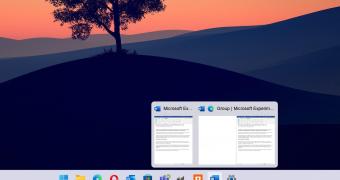 In addition to a new microphone icon that is displayed in the taskbar when you join a Microsoft Teams meeting, the most recent preview build of Windows 11 also comes with a change aimed at the Alt + Tab experience.

The Redmond-based software giant is now experimenting with snap groups that are displayed right in the Alt + Tab app switching interface, therefore making it easier to switch from a certain app to a snap group directly.

The feature works as simple as it could get, as snap groups are displayed in the Alt + Tab UI exactly as you see them when hovering over the taskbar. So instead of switching to just a single app when using Alt + Tab, you can quickly open a full snap group, which totally makes sense for someone trying to be more productive and jump from one group of apps to another in a more convenient manner.

Currently rolling out to select insiders

The feature, however, isn’t live for all insiders who have installed the most recent pre… (read more)
Source: Softpedia News