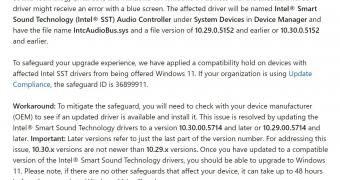 Microsoft has confirmed another bug in Windows 11, this time caused by some Intel SST drivers that are seemingly triggering a BSOD on devices running this OS version.

Microsoft explains that it has already enabled an upgrade block, which means that devices that might be potentially affected by this bug are no longer being offered the upgrade to Windows 11.

The good news is that only certain versions of the Intel Smart Sound Technology Audio Controller driver are being affected, and Microsoft recommends users to update drivers as soon as possible. In fact, this is the easiest way to remove the upgrade block, as simply installing the newer drivers allows devices to receive the update bits for Windows 11.