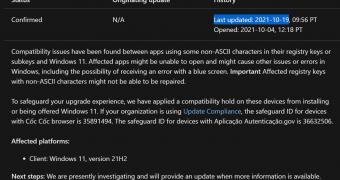 The Windows 11 rollout continues, but in the meantime, Microsoft is carefully watching how the whole thing goes, trying to spot bugs in their early days and prevent them from hitting more devices.

Most recently, the Redmond-based software giant confirmed a new bug (originally acknowledged earlier this month) hitting some Windows 11, in some cases even causing a Blue Screen of Death error.

The company explains it’s all caused by apps using non-ASCII characters in their registry keys, as it discovered a compatibility problem that could potentially cause all kinds of problems, including a failure of launching these apps.

“Compatibility issues have been found between apps using some non-ASCII characters in their registry keys or subkeys and Windows 11. Affected apps might be unable to open and might cause other issues or errors in Windows, including the possibility of receiving an error with a blue screen. Important Affected registry keys with non-ASCII characters mig… (read more)
Source: Softpedia News