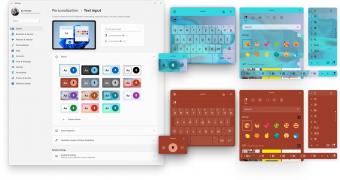 The most recent Windows 11 preview build released by Microsoft to users in the Dev channel comes with new theme customization options, as the company allows the themes for the touch keyboard to expand to other input experiences.

Windows 11, which is currently rolling out to devices out there, includes several new customization options, and by the looks of things, Microsoft wants to continue this approach in the coming updates.

Keep in mind, however, that the improvements which Microsoft includes in Dev channel builds don’t have an ETA, so while they’re available right now in the Windows Insider program, nobody knows for sure when they are supposed to go live for production devices.

New feature rolling out in stages

Microsoft is also rolling out the new theme customization options for insiders in stages, as the company says it wants to collect feedback and only then decide if it’s reliable enough for broad availability in the Windows Insider progr… (read more)
Source: Softpedia News