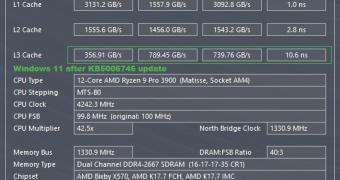 The rollout of Windows 11 has come with several important performance problems, including one hitting AMD Ryzen processors and apparently experiencing a noticeable slowdown overall.

Needless to say, this was quite a major shortcoming for some, especially since some AMD Ryzen CPUs should be able to run Windows 11 just flawlessly. And this is the reason Microsoft has been working around the clock on dealing with the whole thing, and a fix is already being available in the latest patch.

Windows 11 update KB5006746, shipped as build 22000.282 to Windows insiders in the Beta and Release Preview channels come with a dedicated fix aimed at Ryzen processors, with Microsoft explaining the following in the official release notes:

“We fixed an L3 caching issue that might affect performance in some applications on devices that have AMD Ryzen processors after upgrading to Windows 11 (original release).”

The fix does its job