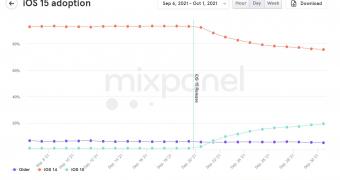 Apple rolled out iOS 15 a couple of weeks ago, and since then, the adoption of the new operating system increased at a strong pace, with 20 percent of the supported iPhones already running it.

This is according to new data provided by Mixpanel, which shows that 19.3 percent of the iPhones are currently on iOS 15.

The new operating system is available for the iPhone 6s and newer.

Plenty of improvements in iOS 15

Leaving aside the early bugs discovered by some of the users who installed iOS 15, the new operating system comes with lots of improvements, including additional enhancements for the notification system.

“Notifications have been redesigned, adding contact photos for people and larger icons for apps that make them even easier to identify. The notification summary is a collection of notifications delivered each day at scheduled times determined by the user,” Apple itself explains.