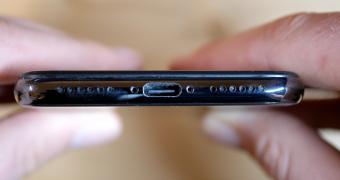 It’s pretty clear already that Apple has almost no intention to change the design of the iPhone in a way that would allow the company to replace its proprietary Lightning port with USB-C.

And while the whole world, especially the European Union, is insisting on this change, the Cupertino-based tech giant still seems to favor its Lightning port going forward.

But this doesn’t necessarily mean that USB-C can’t feel like home on an iPhone.

And robotics student Ken Pillonel has recently demonstrated this theory, as he managed to modify an iPhone X in such a way that it ended up featuring a USB-C port instead of Lightning.

A new video he published on YouTube shows how the whole thing came to be, and what’s more, it offers instructions on how someone else could do the same thing. It’s not easy, of course, but on the other hand, it can finally bring USB-C to an iPhone.

The modded iPhone X is currently listed on eBay, so if you want an … (read more)
Source: Softpedia News