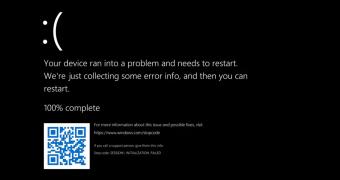 Microsoft has decided to once again change the color of its infamous BSOD fatal crash, this time switching back to blue as the background of the error.

As you could easily guess by simply reading its name, the Blue Screen of Death originally used a blue background. Microsoft, however, experimented with several other approaches, including green for insiders devices in an attempt to make a better difference between stable and preview builds of Windows.

With the release of Windows 11, Microsoft once again changed this color, with the BSOD acronym still making sense. This is because the Blue Screen of Death has become the Black Screen of Death, simply because it apparently made more sense on Windows 11.

Well, not anymore, as Microsoft is getting ready to go back to blue.