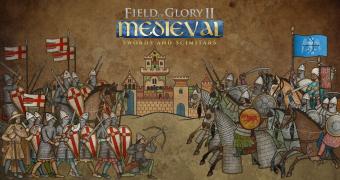 A solid battle line, good archery support, cavalry on the wings, and a good reserve. That’s what a cursory look at medieval history shows to be a good ideal for a general heading into battle. The many new engagements (both designed and generated) included in the new Swords and Scimitars for Field of Glory II: Medieval show how many variations on the theme exist and how exciting it is to find new ways to win an engagement.

The downloadable content was created by Byzantine Games and published by Slitherine. This is the second piece of DLC for the strategy title, with a focus on Eastern Europe and the Middle East from the X to the XII centuries.

The new campaigns feature the greatest hits of the period: two Komnenos Byzantine emperors, Saladin’s exploits, and The First Crusade. New historical epic battles, including Manzikert and Homs. Are fun to play, even if hard to win.