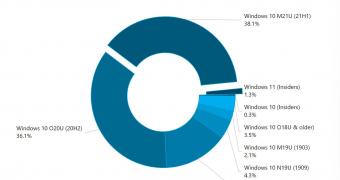 Windows 11 is currently in the process of rolling out to devices out there, and while Microsoft isn’t providing any figures regarding its adoption, data shared by AdDuplex seems to indicate the new OS is already a hit.

No less than 1.3 percent of the devices were running Windows 11 before the official launch, obviously as part of the Windows Insider program, and without a doubt, the next-month statistics are going to show a massive market share for the new OS too.

The rollout of Windows 11, however, could slow down at one point simply because the new OS isn’t available for all devices running Windows 10.
… (read more)
Source: Softpedia News