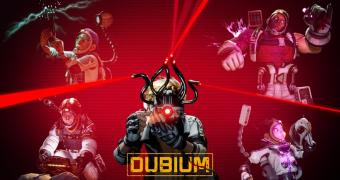 Among Us opened up the gates for a new games genre that wasn’t as popular before: social deduction. Although many have tried to recreate the success of the critically-acclaimed social party game, few managed to come even close to what the folks at Innersloth managed to achieve.

However, we’re happy that more and more developers are picking up the torch are trying come up with interesting twists on an established formula. First Class Trouble is yet another social deception party game where players are assigned different roles, so they’ll have to either collaborate or deceive in order to achieve their objectives.

Today, yet another developer announced a similar game: DUBIUM. Created by MUMO STUDIO, a developer founded by four veterans that each have around 20 years of game development and publishing experience and have worked on hit PC and mobile titles such as Black Desert Online, Boxing Star, Dead to Rights, and more.