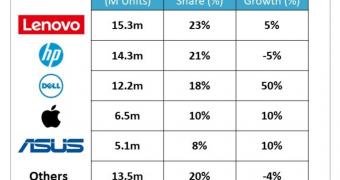 Just like the rest of the world, the notebook sector has been struggling with a very painful shortage of components, and manufacturers out there have been looking into all kinds of approaches in an attempt to deal with the whole thing.

And as it turns out, whatever they tried actually worked, as the notebook market recorded an increase of no less than 8 percent in the third quarter of 2021, mostly driven by a surprising performance posted by Dell.

In fact, HP was the only big name whose sales went down during the quarter, as almost everybody else in the industry managed to record growth in Q3.

More specifically, Lenovo shipped over 15.3 million notebooks, which represents a 5 percent increase year-over-year and a market share of 23 percent. Despite the decline, HP continues to be the number two in the charts with 14.3 million sold units and a 21 percent share.

Dell is now third thanks to shipping a total of 12.2 million notebooks during the quarter, up no less th… (read more)
Source: Softpedia News