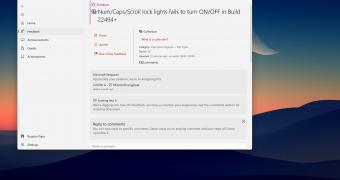 The most recent Windows 11 preview builds reportedly come with a bug that breaks down the key lights for Caps Lock, Scroll Lock, and Num Lock, according to some insiders who installed them.

More specifically, a post in the Windows Feedback Hub reveals that the problem happens on Windows 11 build 22494 and later, with several users explaining that while the keys work properly, the lights don’t turn on. This makes it pretty hard to figure out when they’re activated, and in some cases, users are tempted to believe it’s a hardware issue happening on their keyboards.

The problem also exists in Windows 11 build 22499, the most recent release in the Dev channel.

Needless to say, there’s no workaround for the whole thing, though the good news is Microsoft is already investigating the problem, so it should be fixed in the upcoming preview builds.

In the meantime, such a small error caused quite … (read more)
Source: Softpedia News