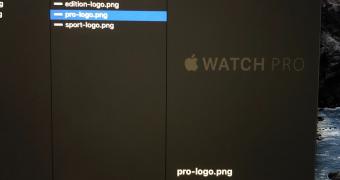 The Apple Watch has become the number one smartwatch out there, and Apple is continuously looking into ways to maintain this strong sales trend, not only with new features but also with fresh models.

And in addition to the regular Apple Watch lineup, the company has been exploring all kinds of other versions, and this is how the SE ended up hitting the shelves in the first place.

But as it turns out, there’s a chance the Cupertino-based tech giant also planned a Pro version of the Apple Watch at one point, though as we all know already, this one never came to be.

Twitter account @AppleDemoYT, for example, has recently come across some very interesting references to a so-called Apple Watch Pro on a demo unit of the 2015 Apple Watch. There’s also a logo of an unreleased Apple Watch model, so most likely, Apple has long been planning an expansion of the smartwatch lineup.