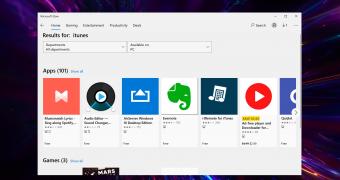 The Microsoft Store version of iTunes has recently been updated to version 12.12.0.6, but as many users ended up finding out on their own, this new release comes with a major bug that makes it impossible to run the app.

Every time the app is launched after the update, it fails with an error reading “iTunes cannot run because some of its required files are missing. Please reinstall iTunes.”

While it’s not clear what’s causing the bug, worth emphasizing is the whole thing only impacts the Microsoft Store version of the app and not the dedicated Win32 installer also available from Apple’s site.

“Same issue here, found many other non-apple forums with same problem and other than the usual repair/remove and reinstall no one has a solution that has worked. I am going to restore my win10 system and see if that works… here’s hoping,” someone says on Apple’s <a href="https://discussions.ap… (read more)
Source: Softpedia News