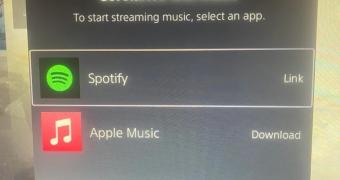 Apple is betting big on Apple Music in the media streaming battle, and one of the long-term priorities for the Cupertino-based tech giant is bringing the service to as many devices out there as possible.

And this makes perfect sense because that’s the purpose of a media platform in the first place. And at the same time, it’s the strategy Apple’s rivals in this market have embraced as well, including here the likes of Spotify and Google with YouTube Music.

Apple is therefore trying to bring Apple Music to as many users as possible, and most recently, new evidence ended up revealing one of the next destinations for the service.

As it turns out, Apple Music references have been found on PlayStation 5, with the app displayed in the music menu on the console alongside Spotify.

This is certainly an unexpected appearance, not only because Apple hasn’t said a single thing about Apple Music on consoles but also because the Appl… (read more)
Source: Softpedia News