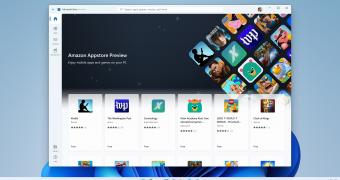 The Android app support is one of the biggest new features supposed to come in Windows 11, but as everybody knows already, it was missing at launch when the new operating system became available for the first production devices earlier this month.

Microsoft just needed more time to make sure everything was running properly, with the company promising to release it for insiders later this year.

And today, the software giant officially announced that U.S.-based insiders can finally try out Android apps on their Windows 11 devices as an early and limited test before the same feature is expanded to more users out there.

The feature is available on eligible devices with Intel, AMD, and Qualcomm chips, with Android apps available right in the Microsoft Store thanks to the Amazon Appstore.

“Our new Microsoft Store search experience delivers the best results available, regardless of the technology used to build an app, because we are committed to offering you choice when… (read more)
Source: Softpedia News